Synchronisations are interpreted on the basis of their structure and the planets that form them. Let's look at some of the important ones. 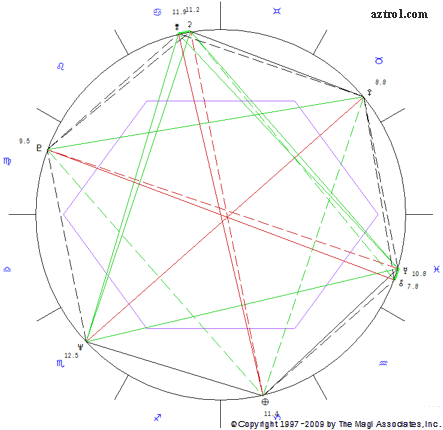 This is a very rare pattern. Some astrologers call this a Grand Sextile, but it is two Grand Sextiles joined together. In this case we see the heliocentric chart of the actor Tom Cruise and the pattern may be interpreted as: a person (Earth/Moon complex) who is powerful (Pluto) and enjoys long-term success (Neptune) from a career (Chiron) as an actor (Mercury) and involvement in movies (Pallas) where he uses his sexual charisma (Juno) to enhance his material wealth (Ceres). This is just one interpretation of this pattern and the different planets have a range of symbolisms. For example Juno also rules delusions and illusions. 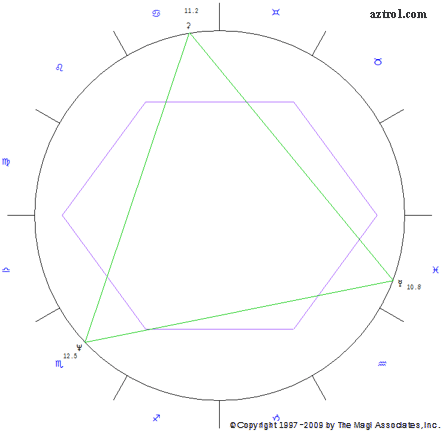 This is a highly favourable pattern and in this case it means creative (Neptune) ideas (Mercury) that bring material wealth (Ceres).

Yod (or Finger of God) 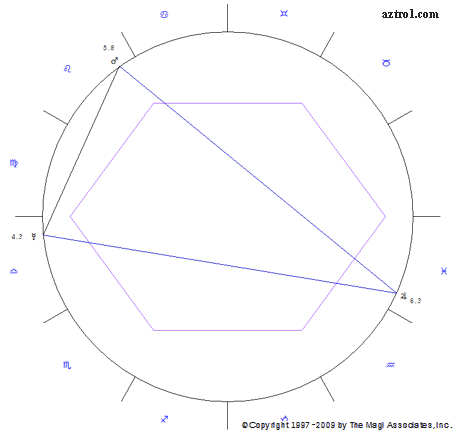 Yods can be favourable or unfavourable depending on the planets involved. The example above would be a great blessing because an interpretation of this pattern would be: energy (Mars) and intelligence (Mercury) favourably directed toward success and good fortune (Jupiter). If Saturn were in the pattern then things may not be so favourable because quincunxes are turbulent aspects when Saturn is involved. 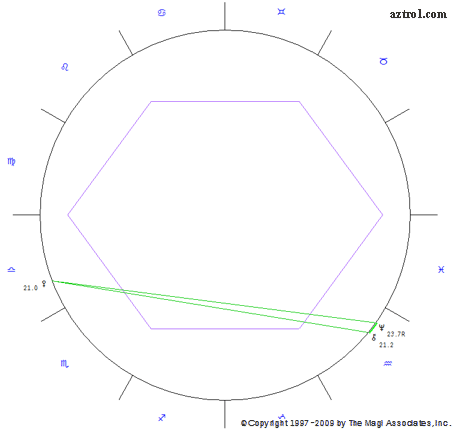 This is a very favourable pattern. In this example we may interpret it in terms of finances and it means money (Venus) and financial security (Neptune) in a career (Chiron). If we look at it in terms of romance then it could mean a long-term (Neptune) marriage (Chiron) that is filled with affection and desire (Venus). One can also get conjuncted squares, but since squares are turbulent aspects, a conjuncted square would be negative. Of course conjuncted quincunxes are also possible. 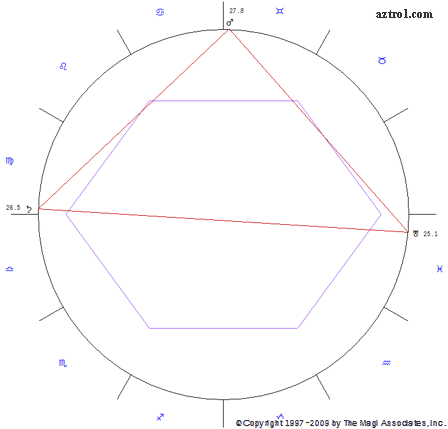 This is a very stressful pattern. We use the negative symbolisms of the planets when we have turbulent aspects or offset the symbolism so that an abundance of something becomes a lack of something. In this example we have a lack of awareness (Uranus) causing problems (Saturn) and accidents (Mars). 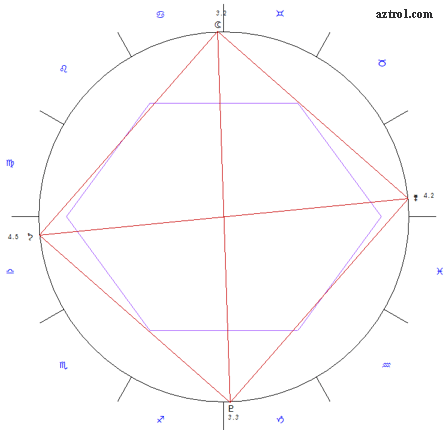 This is another turbulent and difficult pattern. Here we have emotional problems (Moon) being caused by misinformation (Juno), deception (Saturn) and greed (Pluto). 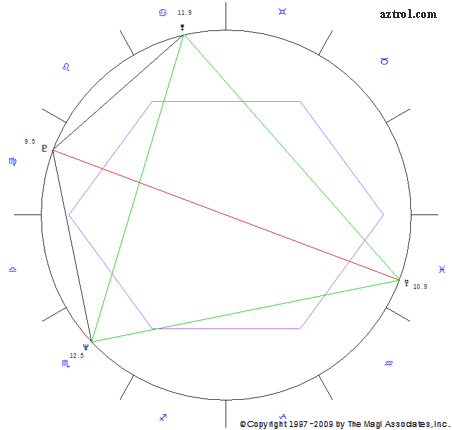 The kite can be a very favourable pattern, but since there is an opposition involved (the red line) we can have problems depending on the planets involved. In most cases we can have enhancements dominating the pattern, but when Saturn, Sedna or Juno is involved then we cannot count on things being positive when one of those planets is in a turbulent aspect. In the example above we have long-term (Neptune) dreams (Juno) being communicated (Mercury) in a powerful way (Pluto). Remember that Juno also rules delusions and illusions. 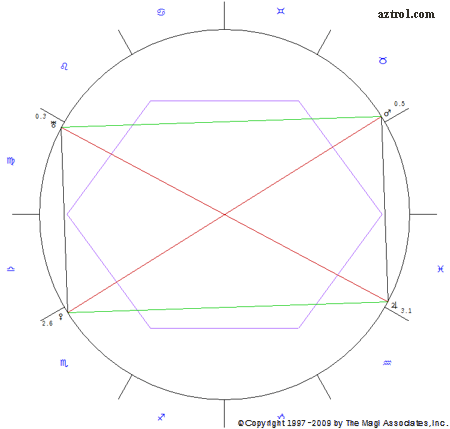 Another favourable pattern. In this case it could mean good fortune (Jupiter) and money (Venus) and massive (Uranus) amounts of energy and enthusiasm (Mars). 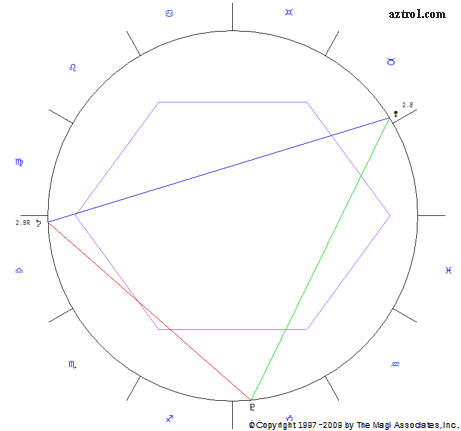 Even though the Magi (or Mystical) Triangle is asymmetrical, it is can still be a significant pattern in a chart. The planets that are involved and their relative positions are important. In the example above we have a very negative pattern because Saturn is in a sensitive point being involved in two turbulent aspects (remember that quincunxes are turbulent when Saturn is involved). Pluto and Juno are sexual planets and this example could mean problems (Saturn) relating to sex (Pluto) and lust (Juno).

Fortresses are four sided figures where two of the sides are parallel. In geometry this is known as an isosceles trapezium (or isosceles trapezoid). The exact interpretation of fortresses depends on the shape (which aspects are involved) and the planets that form them. Some examples follow. 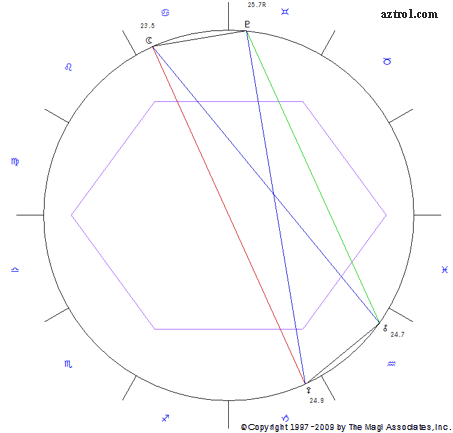 This fortress is invincible because one of the sides is a trine. In this case the trine between Chiron and Pluto adds to that invincibility and this particular fortress means a powerful (Pluto) career (Chiron) with an instinct (Moon) for planning (Pallas). 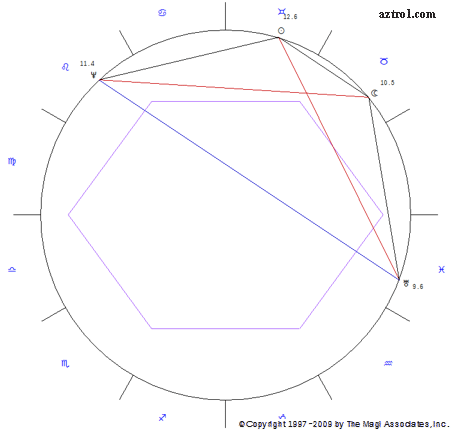 In this example we have a person (Sun) who is emotionally and instinctively (Moon) geared up for long-term (Neptune) fame (Uranus).

This particular pattern means a powerful (Pluto) person (Earth/Moon complex) that has creative (Neptune) ideas (Mercury) and these are great for big-business (Pluto). 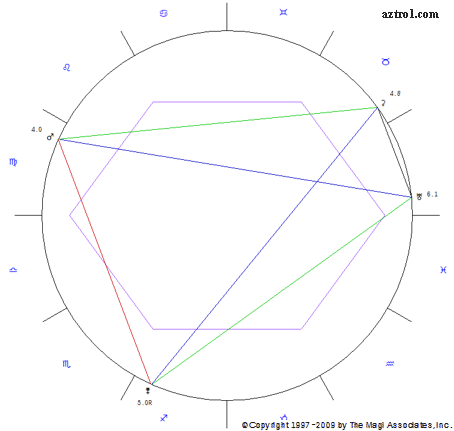 A Flying Eagle is a very favourable planetary geometry and, like the name implies, gives the person or entity that has it in their chart the ability to soar high above everyone and everything. In this example we have a person that uses their body (Mars) perhaps by dancing, to create material wealth (Ceres). With Uranus and Juno involved we also have a sexual charisma (Juno) that is famous (Uranus). 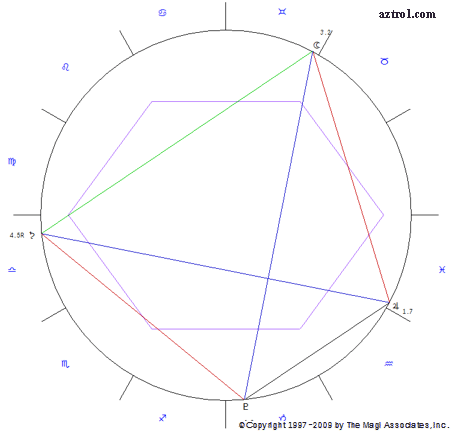 Iron Butterflies are strong like iron, but can adapt to changes like a butterfly. In this example we have a person who is able to control their emotions and create super-success (Jupiter-Pluto). 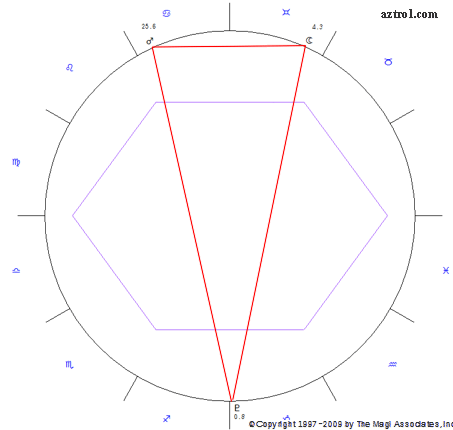 Zodiac7 aspects are neutral and depend on the symbolisms of the planets involved. The symmetry of the geometry indicates that it is significant. Here we have a person with powerful (Pluto) and fiery (Mars) emotions (Moon). 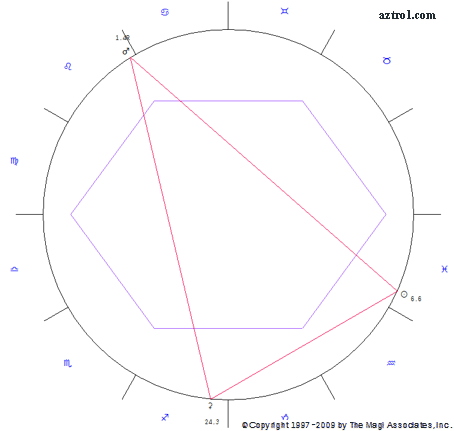 Quintiles and biquintiles are unpredictable and create chaotic triangles. In this case we have a person (the Sun) who sometimes has much enthusiasm and energy (Mars) for material wealth (Ceres), but sometimes doesn't.

Spearheads are triangles where two sides are equal; this makes these figures symmetrical and remember that symmetry is very important. Grand Trines and Yods are examples of Spearheads. 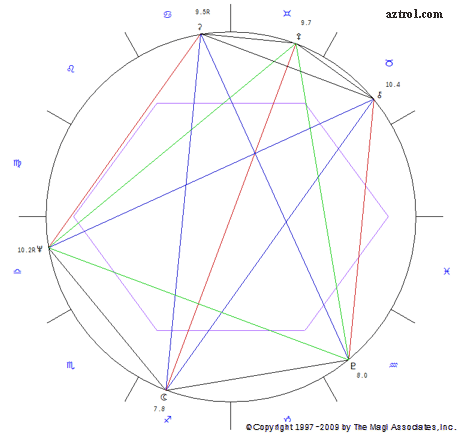 This is a very rare planetary figure made of five Spearheads. It is very powerful since it is so rare and made by so many planets. Here we have long-term (Neptune) powerful (Pluto) plans (Pallas) that are intuitively (the Moon) tuned to a career (Chiron) and material wealth (Ceres). 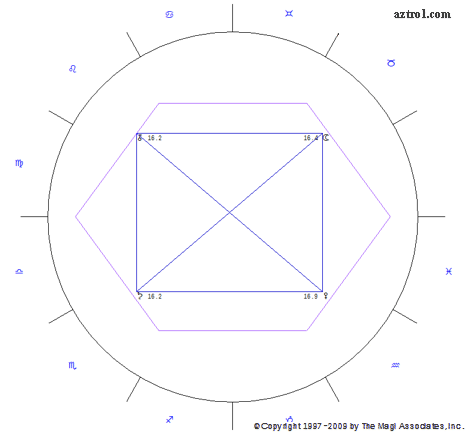 Synchronisations also occur in the declinations and latitudes. Here we have a symmetrical pattern that would give someone the gift to control (Saturn) their emotions (the Moon), their career and family (Chiron) and their relationships and money (Venus).