The Magi Society publishes a monthly guide to the best and worst astrological days on their website (http://www.magiastrology.com) and is based on the planetary aspects and the progressions these aspects make. The guide is for various human activities such as paying bills, having romantic evenings or making new contacts. In 2007-2008 I was working for a mushroom farm that grew shiitake mushrooms (Lentinula edodes) and I was given data of the mushroom yields for the previous year. I wondered if the amount of mushrooms harvested was influenced by the astrology of the day they were "planted" or inoculated and this study is the result of that inquiry.

The mushrooms were grown on blocks made from mostly sawdust and wood chips (English Oak - Quercus robur) with wheat bran and gypsum added as supplements. The blocks weighed 2kg each and were inoculated with mushroom mycelium grown on grain. The harvest from each of the blocks inoculated from the end of February 2006 to February 2007 was recorded. I used these numbers to determine whether inoculating on a good, bad or neutral astrological day had any effect on the subsequent mushroom harvest.

Another part of the investigation was to determine whether the sign the Moon was in when the mushrooms were inoculated had any effect on the subsequent harvest. This was to test the theory and practice of biodynamic farming that uses the Moon's cycles (among other things) for agriculture. The signs of the zodiac are divided into four elements (Earth, Water, Air and Fire) and when the Moon is in a sign of a particular element, then that determines what kind of crop to plant and harvest according to the following:

The p value for the data that was divided into good, bad and neutral days was 1.44 x 10-8 (or 0.0000000144). This is highly significant since it is much less than the 0.05 (or 95%) confidence level. A closer look at the data (Figure 1) shows a clear trend with the highest average mushroom yields from the blocks inoculated on good days with and the lowest from the blocks inoculated on bad days. The blocks from the neutral days were in between these two.

When the good and neutral day data were combined and compared to the bad day data a similar picture emerged (see Figure 2). The difference between the two groups was highly significantly different with a Z-value of 5.58 and a p-value of 1.23 x 10-8.

What is most interesting about these results is that the data was not obtained from a single experiment, but from a year's observations. The observations were made before I started working at the company so I could not have influenced the results. In addition, the people involved in making the mushroom substrate blocks were unaware that their work would be part of such a study. This is significant because it makes this a double-blind investigation. 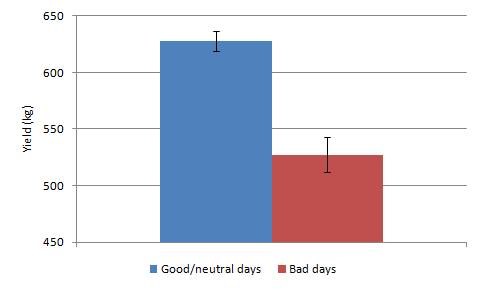 The results testing the biodynamic agricultural practice showed that the mushroom yield was highest when the blocks were inoculated during days when the Moon was in Fire and Air signs (see Figure 3). The blocks from the Air days were the highest, while those inoculated on Water days were the lowest. 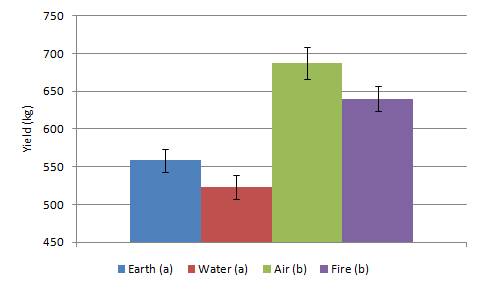 Figure 3. Average mushroom yields of blocks segregated by element of the sign the Moon was in when inoculated (± standard error). Letters indicate significant differences between groups ("a" groups different to the "b" group).

Z-tests were again performed to determine whether they were significantly different to each other at a 0.05 confidence level. The highest difference was between the Air and Water data with a Z-value of -6.22 and a p-value of 2.43 x 10-10. The lowest difference was between the Earth and Water groups and the Air and Fire groups. When the data was grouped according to these (see Figure 4), the Air/Fire group was highly significantly different to the Earth/Water group (Z-value of -6.69 and a p-value of 1.08 x 10-11). 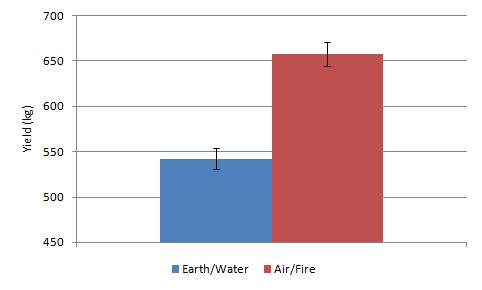 Figure 4. Average mushroom yields of blocks segregated by element of the sign the Moon was in when inoculated (± standard error).

Mushrooms aren't plants, but fungi. The actual mushroom that is produced by some fungi can be likened to a plant's flower because spores (or "seeds") are produced in it. We see that the blocks inoculated on days when the Moon was in Air and Fire signs produced the most mushrooms. In biodynamic agriculture when the Moon is in Air and Fire signs it is best to plant when you're interested in the plant's reproductive parts (e.g. flowers and seeds) and this also corresponds to the reproductive part of the mushroom fungus.

The data set was divided into groups according to both the element of the Moon sign and the good/bad day (see Figure 5). The highest yield was seen with the Air sign on a good day (average = 793.47 kg) and the lowest on a bad day when the Moon was in an Earth sign (average = 464.27 kg). That is almost a 60% difference and indicates that a combination of good/bad day and Moon signs could be successfully used by farmers to get the best yields from their crops. 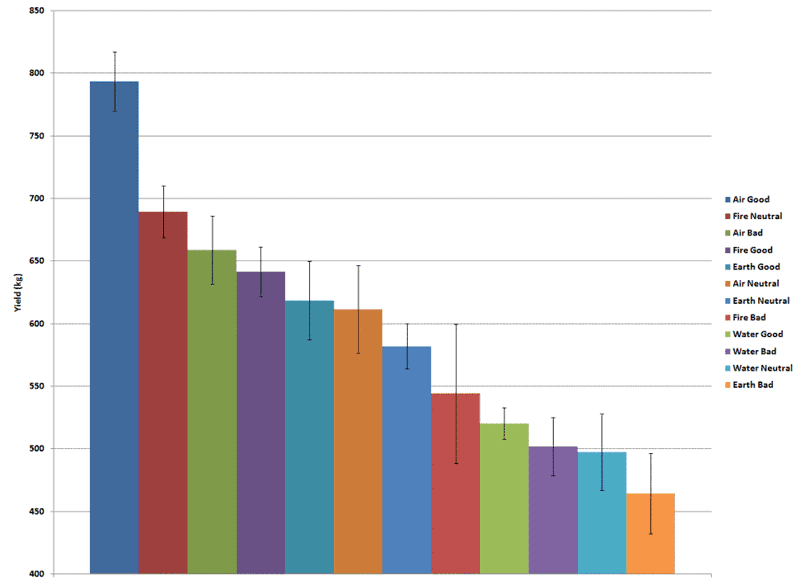 Figure 5. Average mushroom yields of blocks segregated by element of the sign the Moon was in when inoculated and whether it was a good, bad or neutral astrological day. (± standard error).

The implication of these results for not only agriculture, but other human activities is most interesting because astrology can be used to improve productivity and this of course means increased prosperity.

Are these results due to the mushrooms responding to the good/bad astrological days, or was it the person doing the inoculations that was responding and somehow inoculated differently on the different days? Regardless, the question remains: What is the mechanism for this action?

I was not expecting to get these results when I started this small study. I'll even admit to be astounded and triple checking all the data. As a scientist, I'm extremely curious about this phenomenon and this is one of the things that convinced me that astrology really works.